This blog will explore my observations and research into the postural pains felt while interacting with technology. This research will support Anna’s work on acupuncture and light therapy. This will then be combined with strapping tailored in response to my observations of how to reverse the most prominently observed postural problems.

The largest problem with conformity to technology is our interaction through seeing where the body suffers because of the need to see and engage with technology and “the eyes always win” (Stumpf, 2013). This leaves your posture to subsequently suffer leading to neck, back, shoulder and wrist pains (Joao P. Caneiroa, 2009).

It is through the disproportional load on the body and bad postural positioning of the back and neck that you start to experience pain with the over and under extending of the back and neck. Figure A, highlights the most common pain felt from such bad posture (Stumpf, 2013). The high lower back and then neck pain is attributed to the most popular posture position which is hunching (Figure A). Most people don’t adjust their chair height or use their screen rotation which leads to poor correct posture and impacts on health.

The body’s response to switching between hunching and slouching is a mechanism of coping with pain due to the pressure points we create with unnatural body positioning. The body relies on the back of the chair for support to compensate for the extra strain. In the slumped position the body will move back into the hunched position to compensate for the lower back and pelvic muscle strain. This strains the muscles and creates bad habits. Figure B, shoes how our bad habits from sitting for long periods of time are being mimicked in our standing posture as our muscles change due to the strain created on the body through poor posture (Joao P Caneiroa, 2009; Stumpf, 2013).

Studies show it only takes three hours to train your muscles and to form postural habits. This is also exacerbated by other poor habits like crossing your legs which misaligns your shoulders, neck and spine. This is even more troublesome as habits become subconscious and part of your muscle memory, which makes reversal even harder (Phys, 2014; Stumpf, 2013; Gokhale, 2012; Dalkilinç, 2015). To understand the background of posture please refer to video below: The benefits of good posture. 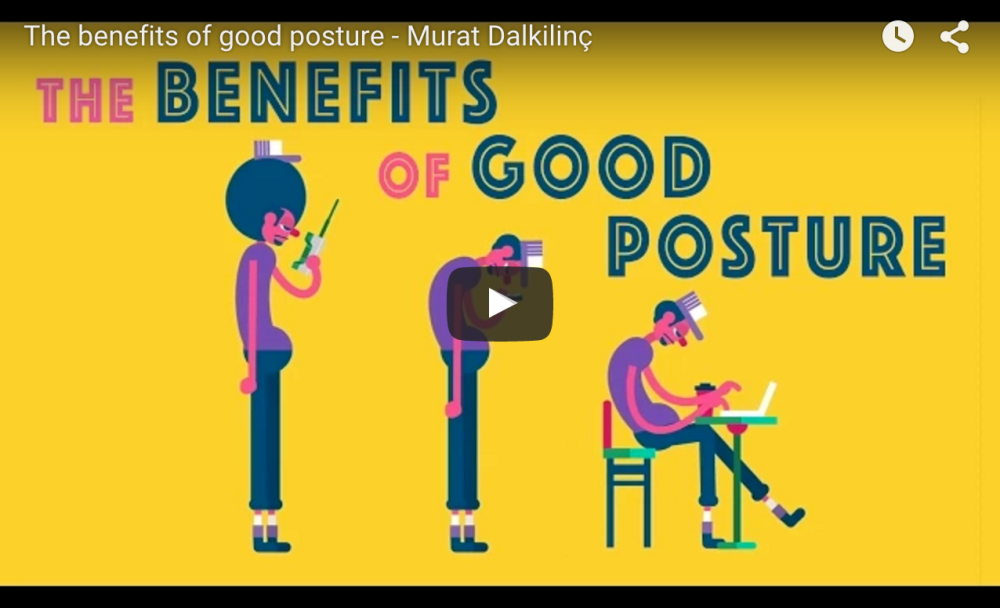 Within our brand promotion we will outline to the consumer, the numerous health benefits associated with using ‘Embrace Clothing’ to improve posture. These benefits will emphasise to the consumer how the clothing will directly improve physical posture and will also focus on the personal benefits by appealing to people’s sense of vanity and how they look (Perner, 2014). We can also increase energy levels, promote excretion of good hormones, influence mood and improve socially as people appear more confident in themselves, with their peers and become more self-directed. Therefore, ‘Embrace Clothing’ is more than just a clothing product. It is also about the promotion of long term personal and social health benefits for the consumer.

In addition Francesca Lanzavecchia’s book, Pro-Aesthetics deals with the divide between the medical functions of prosthesis products for forms of disability and brings them into the realm of society, fashion, and beauty. Lanzavecchia’s has taken typically bulky and unattractive prosthesis products, such as the neck and finger brace and has transformed it into a fashion piece that is delicate, considers breathability and still allows functionality through the flexible plastic coating. The Little Black Finger Brace image below, draws on the idea of creating a context for the garment to be visualized by the consumer (Lanzavecchia, 2008). These products provide the consumer with a creative functional choice, as opposed to the visually unappealing products like the traditional cast or brace. Therefore people will more likely wear it, rather than cope with the pain and not wear an ugly product. By implementing posture strapping into the garments as to seamless blend in with all fashion, we will successfully be marketing a product the consumer needs, as well as the physical fashionable aesthetic appeal of the product (Lanzavecchia’a, 2008).

Cooper, Belle Beth. THE SCIENCE OF POSTURE: WHY SITTING UP STRAIGHT MAKES YOU HAPPIER AND MORE PRODUCTIVE. 2015. October 2015 <http://www.fastcompany.com/3021985/work-smart/the-science-of-posture-why-sitting-up-straight-makes-you-happier-and-more-product&gt;.